Tell me if this sounds familiar.

You just crushed your workout. Straight away you jump in the car and head home. You arrive home, throw your sweaty clothes in the laundry and jump in the shower.

From there you begin to organise things for your day – you’ve got everything you need to head to the office, you walked the dog, heck you even made after work dinner plans with your bestie.

You rush out the door and grab the train into the city; your office awaits. You use the hour train ride to rest your eyes in anticipation of the hectic day you’ve got ahead of you.  Does that sound like you?

In an effort to reach your health and fitness goals you’ve systematically placed your workouts in the morning to ensure that they take place. Fantastic! Well done for sure.

But you forgot just one thing—you forgot to eat. I know.

You’re thinking, “Eat? I’ll do that when I get to the office; a few hours won’t matter much.”

You might want to think again, especially if your goals involve dropping body fat. Some really interesting research shows that the more time you spend in a caloric deficit the higher your body fat will be.

Consuming frequent meals may do more than deliver nutrients to your muscles to aid in repair and replenishment of glycogen stores. Consuming enough calories throughout the day may be an important signal to your body to shed body fat. That is exactly what Dr. Dan Benardot has gathered from his studies [1,2].

During his studies Benardot and colleagues looked at 4 different groups of athletes and their 24-hour energy balance as well as within day (hourly) energy balance.

In order to assess the caloric expenditure of the athletes they were asked questions like, “What was the first thing you did upon waking?’ and ‘what was the next thing you did?’ until the 24 hour period was covered. They were also asked to describe everything they ate or drank over the same 24-hour period. Plotting the hour-by-hour energy intake and expenditure researchers noted some interesting things. 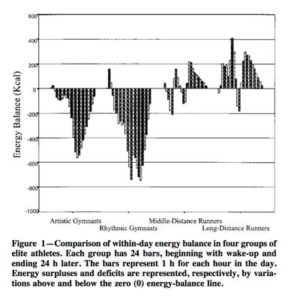 It wasn’t simply the 24-hour energy balance that mattered, it mattered more when the calories were consumed.

This same protocol was used with average college students (who were physically active, but not athletes) and the same types of things were seen [2].

It seemed that those who spent more of their day within 400 calories of energy balance – either 400 calories below or 400 calories above- had the lowest body fat. As a plus, they also reported feeling less hungry.

What does this mean for you?

You haven’t eaten anything since 6pm last night. You woke up, worked out, came home prepared for work, and headed out the door.

For argument’s sake let’s start you off at a zero balance when you woke up. This likely isn’t the case since your body was burning calories all night while you were sleeping, but for the sake of argument let’s assume it were true. You wake up, you are in balance as far as calories consumed and expended. You don’t eat anything but you begin your efforts to ready yourself for the gym. You’re burning calories. Let the negative energy balance begin.

You get to the gym and kill your workout. Depending on your sex, body size, effort level, and workout type you could easily have burned between 200-600 calories or more. The negative energy balance is growing. You head home, get ready for work and jump on the train. It’ll be 10 am or later before you ever eat. When you do it’ll be something light – maybe a banana and a coffee. By now you could be 800 calories in the hole, maybe more.

Since you are trying to lose weight when you do eat you consume lower calorie meals. Those meals do little to close the gap between the number of calories you have burned so far in your day and the number you have consumed.

In short you are spending a lot of your day in a rather large caloric deficit. Remember what happened when the athletes did this? Yeah, didn’t work out so well for them either.

Spending a great deal of time exercising and dieting creates a large caloric deficit that really appears to work against your fat loss efforts.

Excessive amounts of exercise and/or crash dieting really does tip the scales in favour of fat loss plateaus and frustration – which often triggers even more excessive dieting and more exercise. It’s no fun spending your life on the diet-exercise treadmill!

A slight deficit may work to your advantage, or as Benardot’s research showed, even a small surplus. But one thing is clear spending a large chunk of time in a caloric deficit greater than 300 calories may be detrimental to your fat loss goals.

The key to this is, knowing how to fuel your body for what you are about to do and then eat to recover from what you have just done.

The timing of your nutrition and meal frequency really appears to make or break the right metabolic environment for fat loss, muscle recovery and better health – all at once! Once you know what are the correct foods and the correct times it all becomes easy. When you understand the simple rules, you know exactly what are the best choices to make and, what a poor choice is that will derail progress.

Even better, when you know how to construct metabolically precise meals you can program your metabolism to avoid overeating and body fat accumulation.